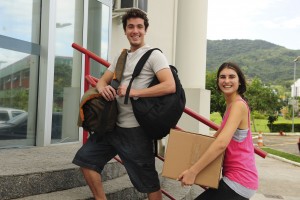 When we were in high school, applying to college was a rite of passage. Seniors would apply to two- or four-year schools and then wait for the mail every day, in anticipation of the thick envelopes that signified acceptance. Today, more high school graduates are starting to choose alternate paths. In fact, NBC News recently pointed out that college enrollments are declining.

Tuition costs have risen exponentially since 2000, mainly because nearly every cost associated with going to college has gone up. Colleges—both public and private—find themselves spending more on research (especially at research-focused institutions), student services and instructional staff. Private universities are reporting a dip in gifts and donations, because families have been putting those funds toward paying their tuition bill instead.

Last year, NBC reported that the cost of tuition at a private college increased a mere 3.8 percent, which was considered a bargain compared to larger increases seen in previous years. And for in-state students attending public universities, they had to spend just 2.9 percent more, which was the smallest increase in more than 30 years.

In 2012, the number of students attending college fell by almost half a million people after more than 20 years of rising enrollment. One would think that higher learning institutions would also cut their costs to help attract new students, but it’s unlikely we will be that lucky.

The bills still need to be paid and private schools often spend more educating each student than their tuition covers, so financial contributions cover the gap. However, with less money coming from alumni donations and endowment funds, colleges need to find another way to make up the difference.

A declining enrollment obviously impacts the university, but it also has implications for the community around the campus as well. Restaurants and stores that receive frequent patronage from the student body also lose business, which could force them to downsize or ultimately close. These businesses are already facing competition from online retailers, who make it easier than ever to purchase school supplies, clothing and even groceries, which is ideal for busy students who only have a few minutes during a study break or between activities.

These losses translate into a less vibrant community, with fewer coffee shops to study in and a smaller selection of shops and restaurants. This is especially detrimental to students who do not have cars on campus and cannot drive to alternate shopping destinations.

One community college in California, Ohlone College, has decided to launch an initiative to raise additional revenue for the school using its unused property. According to the Contra Costa Times, the school is considering leasing 15 acres of surplus land to a local developer for 90 years.  The developer would build apartments on the land that would provide a new revenue stream for the university.

The idea to build new housing on university land was born out of necessity, and as more institutions find themselves in a similar situation, we may see more of these types of projects in the future. Clearly, it’s a new way to fund the institution and maintain the retail and restaurants that serve the student body. Preserving the community surrounding a university is critical, as vibrant social centers are what help to draw new students and give the university its character, even as the pool of high school graduates shrinks.

Universities and their facility management teams can see how successful their alternative revenue streams—whether it’s new housing or another initiative—are by tracking and counting people they attract over time.  If the new housing is providing fresh revenue for the university, traffic in the neighborhood will increase.

Many colleges already employ people counting sensors and technology in their student unions, libraries and book stores. Similarly, university-owned and privately owned retailers and businesses can use people counting to see the tangible results the new housing is having on their bottom line.