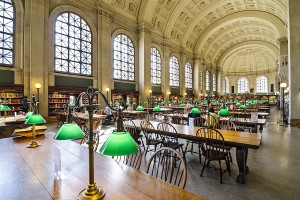 Libraries, schools and universities must deal with numerous challenges when they seek to convert or expand their physical facilities. Those that are fully or partially funded by tax dollars face static or shrinking budgets, which raises the stakes for any decision requiring capital expenditures. Even private institutions need to build a solid case for change, particularly one that will involve cost, time, and inconvenience to students and faculty.

In addition to these very real hurdles, such institutions often suffer from a “data deficit” about how their current facilities are actually used – one that can be filled by a people counting system.

Take public libraries. The growth of e-books, along with libraries’ expanded role as providers of computing/Web connection services, means that traditional metrics (e.g. the number of physical books in circulation) no longer provide a complete picture of patron usage. Universities face similar measurement challenges: students frequently use public spaces in libraries or student centers without ever registering their presence by checking out a book, logging on to a computer, or making any kind of a purchase.

In these cases, a people counting system can show that an expansion is needed by providing accurate, time-stamped data about how many people are entering, exiting, and actually using current facilities and services. And armed with this detailed information about usage and traffic patterns, schools and libraries can plan their facility improvements for maximum benefits.

Data from people counting systems can help pinpoint specific needs, particularly in multi-use areas on campuses and in libraries. Heavy traffic in an area with wired computers, for example, can justify expanding the number of terminals available. Conversely, if traffic (and computer usage) are decreasing over time, patrons may be making greater use of their own smart devices, justifying an expansion of WiFi coverage areas as opposed to purchasing more fixed terminals.

Knowing which buildings on campus receive the most traffic can guide a university as it decides where to spend its money. Making smart decisions in this area is critical as space accounts for 20% of a university’s entire budget. Facilities that are heavily traveled are more likely to provide a strong return on money invested in them, and they are also prime spots for providing information and selling advertising space. In addition, data from people counting systems can identify buildings or areas that are in need of repairs, remodeling or a physical “face lift.”

On a day-to-day basis, people counting systems offer operational guidance. Just as in a retail setting, long lines at a library’s checkout area can indicate the need to allocate more staff there. Data showing which parts of a physical facility are used, and when they are busiest, can help determine optimal schedules and placement of workers. Knowing which times are least busy can provide guidelines for scheduling janitorial services so as to minimize disruption to students and patrons.

Even after a university or library has made a successful case for expanding its facilities, people counting systems are still valuable. By providing pre- and post-expansion traffic information, the organization gets solid data to justify its expenditures. Such proofs will come in handy when the need arises for the next facilities upgrade, whether it’s major or minor.