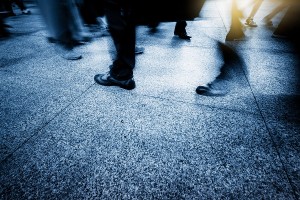 Maximizing the returns from an investment in people counting solutions means leveraging these technologies to do much more than simply “count heads.” When used to their fullest extent, people counting systems can provide data that’s valuable both for basic business metrics such as conversion rates as well as more nuanced insights into areas ranging from staff deployments to measuring the impact of marketing programs.

A key requirement for garnering this range of business benefits is the use of bidirectional people counters, which are capable of tracking peoples’ movements in various directions. Bidirectional people counting systems (which can include both video and thermal-based sensors) reveal whether someone is entering or exiting, providing accurate customer counts at any time. Overhead sensors provide a more detailed view of traffic movement throughout a location, revealing not only how many people are in the store but also where they go, how long they stay, and what they do.

Measuring conversion rates accurately: Knowing the percentage of shoppers who enter a store and actually buy something is a basic retail business metric. Bidirectional people counters’ ability to detect how many people are entering and exiting at any given time allow retailers to track conversion rates in more detail, showing the impact of factors such as the time of day, how crowded the store is, and the number of sales associates and cashiers on duty.

Keeping an ongoing count of the number of people in a location: Bidirectional people counters provide the means to determine how many people are in a store from the start of the business day through to closing time. This is critical for collecting conversion rate data that can be tied to times of day or to specific events, as opposed to relatively uninformative daily or weekly averages. Measuring the fluctuations in total people counts also lets retailers determine the optimal number of customers in a given location. As a rule, more traffic is good, but too much traffic can be counterproductive: too many customers can mean crowded aisles, an insufficient number of staff to serve them, and a greater likelihood of out-of-stock situations.

Deploying staff more effectively: In larger retail locations with multiple departments, it’s critical to know not just the total number of employees needed at any given time, but where they will have the biggest impact on customer service and sales. Without bidirectional people counters’ ability to trace traffic flows and determine density patterns, this becomes a difficult task. For example, high traffic density in a department that isn’t accompanied by a corresponding rise in its products’ sales can mean there are not enough staff people to take care of customers – particularly in departments requiring high levels of customer engagement, such as cosmetics, jewelry, or home decorating.

Measuring marketing success: The detailed, minute-by-minute data about total store counts, traffic patterns, and conversion rates provided by bidirectional people counters is critical to measuring the effectiveness of both large-scale marketing programs designed to increase foot traffic, as well as individual promotions taking place within a store. Basic business metrics such as CPM (cost per thousand), the cost of reaching one thousand people or households, as well as sales per square foot, rely on accurate data in order to be useful for analysis and comparisons to previous campaigns, other stores in a chain, or to competitors’ performance.

The use of bidirectional people counting technologies allows retailers to do more than get a basic sense of their business’ health. More granular data about how many people are in their stores, where they go and how long they stay allows companies to diagnose “trouble spots” and discover the most effective cures.

Get A Free Quote